We have been reading with interest all the blogs and news posts regarding the significant changes to the Google search results pages (SERPs) this week and, having sat back and taken it all, we’re ready to throw our two-penneth into the ring.

What exactly has changed with the SERPs?

First up, for those who may not have seen it yet, Google rolled out one of their biggest changes to the SERPs for a good number of years this week when it removed the text ads from the right hand side of the page. They have instead replaced this with four text ads (instead of 3) in the mainline area above the organic results for ‘highly commercial queries[i]”. Three text ads will also be shown at the bottom of the SERPs under the last organic listing.  This means that the number of ads on any given search will shrink from anything up to 11 down to a maximum of 7 and in some cases, just 6 ads. One thing to remember in all this is that this is for desktop searches only. That right hand side where ads used to appear will continue to display product listing ad blocks and knowledge panels for relevant queries. 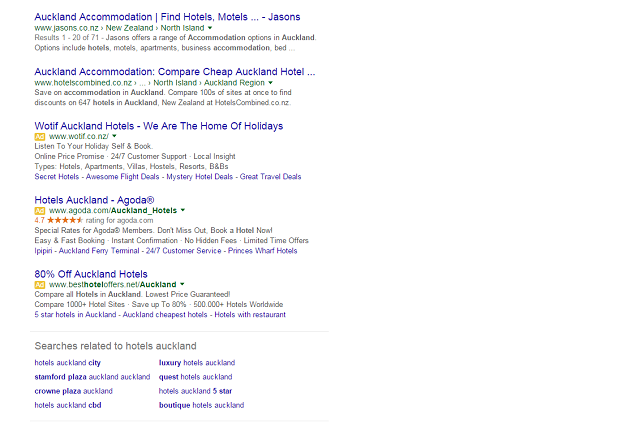 Where has this change come from?

It seems as though Google has been testing this new layout for some time now (possibly several years). If there’s one thing we know about Google, it’s that they like to keep things fresh and ever-changing, trying to improve the user experience when they land on a SERP and some would cynically argue, also generate more revenue for the company.

What does this mean for PPC marketers?

There has been a lot of mixed reaction to this from those who are working predominantly in search marketing (or PPC). The instant reaction was to suggest that less ads and less visibility would mean skyrocketing CPCs, with companies scrapping it out for those top four spots and less demand for the bottom three slots compared to ads on the right hand side. Whilst this may play out, in realty for PPC and search marketers, there are now actually four key advertising positions that sit above the organic results. This means fresh opportunities to achieve strong placement where four becomes the new three and three the new two. It was expected that position four would see the biggest uplift from the change, however early data shows that it was in fact position three that was the biggest winner: For PPC marketers, there are some other advantages. Previously, if your ad was displayed on the right hand side, you couldn’t include call-out extensions, sitelink extensions, locations extensions etc – these were only a benefit of the top three ads. Now, no matter where your ad is placed, you will be able to include these extensions across the board, helping you with both testing and reporting.

With no ads down the right hand side, the SERPs now look a lot more ‘native’ with little to distinguish between ads and organic results – another plus for PPC marketers.

In terms of organic results, the jury is still out. When checking a number of highly commercial search queries, we found that the number one organic result in a lot of instances now resides ‘below the fold’ on a standard resolution monitor. The fourth ad placing takes the place of the #1 organic results in terms of placement on the page which seems to place even more pressure on SEOs.

Organic real estate has been shrinking for years thanks to the introduction of new features to the SERPs by Google at various stages from map listings, to knowledge boxes, to featured snippets, to news and so on. For a number of search queries, particularly those relating to location based queries such as ‘hotels auckland’, achieving a strong ranking in the maps results (local search) becomes even more critical as the first traditional ‘blue link’ result for this particular search query appears a long way down the page.

At this early stage, it is difficult to see how this is going to play out in the long run. As with everything, there will be winners and losers – those who currently enjoy an average position in the top 3 Ad results may not see a huge impact (other than a possible uplift if you occupy position 3). It is possible however that bidding on those ‘commercial queries’ may increase and it may come down to a survival of the fittest (or in this case, the biggest budget) – as we get more results, we will keep you posted.

For SEOs, it will be a case of business as usual. Continue to push hard, look at all possible avenues and keep checking those SERPs to see what is changing and how you can occupy those crucial positions.

[i] A highly commercial query has yet to be defined by Google, however search queries such as ‘hotels in Auckland’ or ‘car insurance’ are displaying four ads in the SERPs. It is widely understood that ‘commercial queries’ are those that indicate a high level of user intent to purchase.